Now, does William Li look like someone who wants to have his company’s shares delisted from the NYSE? No, I don’t think so. Controversy has immersed NIO Inc. (NIO) and most other Chinese companies this year. Despite putting up stellar growth numbers, NIO’s stock price has deflated by about 50% from its all-time high achieved earlier in the year. Right now, NIO trades at around five times next year’s sales estimates, which is substantially lower than its direct competitors (other premium EV manufacturers). NIO also has the added advantage of conducting business in its domestic market. Moreover, the fear of delisting seems highly overblown and is a prime reason why NIO trades at such a deep discount. Ultimately, NIO’s growth will likely exceed estimates, and the company’s share price should move substantially higher in future years. 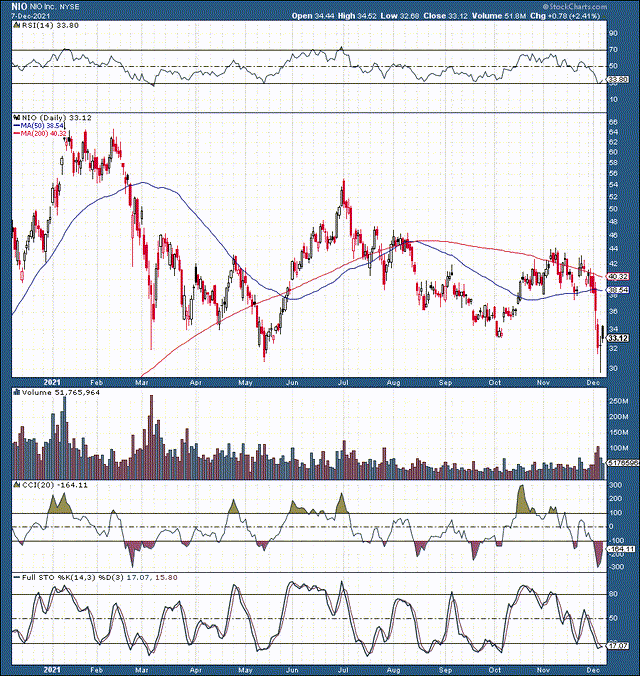 NIO’s stock recently crashed to a new 52-week low, touching down on below $30 for the first time in over a year. So, why is NIO’s stock cascading lower, dropping by 30% in the last month alone? No, it’s not that NIO is performing poorly. On the contrary, the company just had a record deliveries month in November. Shares continue to be under pressure due to the perpetual panic about China, delistings, and other transitory factors that don’t directly correlate to NIO’s performance as a company.

Nevertheless, the stock is oversold now, and the technical image should begin to improve from here going forward. We see a possibly long-term double bottom pattern developing here, as shares hit $30 support in recent sessions. Moreover, the RSI touched down on the 30 level, while the CCI registered a -300 print, consistent with another highly oversold point earlier in the year. The full stochastic is starting to turn upward, and we should begin to see the stock return to a more bullish technical momentum soon.

How To Navigate The China Induced Selloff

Most Chinese stocks have gotten crushed lately, and NIO is no exception. However, looking deeper, we see that NIO probably shouldn’t be affected by the meltdown in specific Chines equities, and NIO’s recent selloff is perhaps a transitory phenomenon. In general, it’s a messy situation with Chinese stocks right now. No one seems to know what the Chinese Communist Party (“CCP”) will do next.

Will the CCP put in more stringent regulations? Will the Chinese government nationalize Alibaba (BABA)? Will the party forbid Chinese companies from listing abroad or, more specifically, in the U.S.? But the most pressing question right now seems to be whether NIO and other Chinese companies will get delisted from U.S. stock exchanges?

There are several serious questions here, and the recent uncertainty has been highly detrimental to confidence in NIO and the company’s share price. So, let’s dive a bit deeper and see if we can answer some of these pressing questions for NIO investors.

The CCP has been flexing its muscles, and it’s clear that the party is all powerful and essentially calls all the shots in China. Nevertheless, it’s not in the party’s interests to damage its economy and set economic progress back twenty or 30 years.

Did you know that Chinese stock losses (listed in the U.S.) have eclipsed $1 trillion this year alone? In my view, this detrimental dynamic is not the economic progress that the Chinese government needs or wants. I hear people say that “the CCP doesn’t care about stock prices. All they want is power.”

In my view, the Chinese government cares about stock prices. China’s economy is relatively advanced now, and the Chinese stock market plays an integral role in the country’s social structure. Without a stable stock market, the CCP could be looking at possible civil unrest, social disorder, and other tragic outcomes that could weaken the CCP’s position and reduce the party’s power and influence over its citizens.

In fact, Chinese regulators recently came out with a statement soothing delisting concerns. China’s securities regulator said that it respects where Chinese companies list shares and raise funds. Furthermore, the regulatory agency said that reports for regulators to push for VIEs to drop their U.S. listings are a complete misinterpretation and misrepresentation of the agency’s regulations.

Yes, China’s ride service DiDi (DIDI) is delisting from the NYSE and is looking to list in Hong Kong. However, this is ultimately DiDi’s choice, and this doesn’t mean that every Chinese company will delist. Many companies have dual or multiple listings, and in general, the delisting fears seem highly overblown. NIO has no incentive to delist from the U.S., and the probability of a NIO delisting occurring is remarkably low, in my view.

Now that we discussed why NIO would probably not give up its U.S. listing let’s talk about the company. One overlooked factor is that NIO is a genuine premium EV manufacturer. This phenomenon sets NIO apart from other Chinese EV manufacturers such as XPeng (XPEV), Li Auto (LI), and BYD (OTCPK:BYDDF). In my previous NIO analysis, I concluded that NIO has an average (vehicle) selling price (“ASP”) of about $65,000. Therefore, NIO primarily competes with premium EV automakers like Tesla (TSLA) and Lucid (LCID).

What sets NIO apart from its American counterparts is that it’s a Chinese company primarily focused on growing market share in China’s domestic market right now. Moreover, NIO has the support and the backing of the Chinese government. During the height of the pandemic, NIO was still a struggling EV startup whose problems got resolved after a $1.4 billion investment from the Chinese government. There’s an enormous incentive for NIO to succeed in China, and the company is starting to shift into high gear.

In November, NIO hit a new record for monthly deliveries. The company delivered 10,878 vehicles for a 106% YoY gain last month. In total, NIO sold 80,940 cars in the first 11 months of the year, a 120% YoY increase. At about $65,000 per vehicle, with another 10K vehicle month likely, NIO should deliver close to $6 billion in revenues this year.

We see that NIO’s revenues continue to increase at a robust pace post the COVID-19 slowdown, and we should continue to see substantial growth going forward. The company will deliver slightly shy of 100,000 this year, but the company is gearing up for much more significant production. It’s important to point out that demand is not the issue for NIO, and there should be no shortage of demand for high-quality premium EVs in China in future years. With NIO’s planned Q1 2022 launch of its flagship ET7 sedan, the company plans to achieve an annual production capacity of 150,000 vehicles on a single shift and 300,000 on a double shift. In addition, another 300,000 units of capacity will come from the company’s second plant scheduled for completion in the second half of 2022.

Analysts’ consensus numbers illustrate about $16.64 billion in revenues in 2025, followed by a jump to around $30 billion in 2026. This period is presumably when some analysts factor in NIO’s second plant revenues to come online. However, NIO’s second plant production will likely be reflected in the company’s revenues much sooner, as NIO plans to begin production at the Neo Park facility in Q3 2022. Therefore, it’s likely that NIO’s revenue growth will be much higher than anticipated.

Here is what NIO’s revenues could look like in future years:

If NIO can get up to twin double shift production at both of its plants within the next several years, it can produce enormous revenues of roughly $32 billion in 2025. Moreover, provided that demand remains strong for NIO’s vehicles, the company could have plans to build a third plant by this time (2025-2027). Additionally, NIO will likely expand operations to other EV markets in future years. Given the proposed growth dynamic, NIO’s profitability and stock price could increase substantially as the company advances from here.

Here’s what NIO’s financials could look like in future years:

You may be wondering why the price to sales multiple is trending higher in future years. Due to the current China uncertainty, NIO’s price to sales multiple has been suppressed to incredibly low levels. For instance, Tesla is probably NIO’s closest competitor, and the company’s current FWD P/S ratio is about 15. If NIO were trading at 15 times FWD P/S, its share price would be about $100 right now. Therefore, I don’t think that it’s a big stretch to expect NIO’s P/S multiple to expand moderately from here once the China uncertainty settles down. Even at the height of my projections, I’m still only factoring in a P/S multiple 50% of Tesla.

If you think Tesla’s FWD P/S multiple is high, it’s nothing compared to Lucid’s 36 times forward sales valuation. Even China’s XPeng trades at 7.2 times forward sales, and many far slower growth companies in the U.S. trade at far higher multiples than NIO. Therefore, NIO is very cheap right now, its multiple will likely expand, and its stock price should go substantially higher in future years. Moreover, given NIO’s robust growth prospects and substantial profitability potential, the company’s share price could appreciate to around $200 by year-end 2025, in my view.

Despite my bullish outlook, there are various risks to my thesis. The China debacle could continue. Therefore, delisting fears and other detrimental factors related to the CCP could continue to pressure NIO’s stock price. Also, the company could run into various production issues and may not reach the production capacity I envision in time. Moreover, NIO’s vehicles may experience a drop-off in demand, in which case the company’s shares price would suffer. NIO remains an elevated risk investment, but there is substantial reward potential if everything goes right as well.

The Complete Home Saving Guide For...

The Complete Home Saving Guide For...